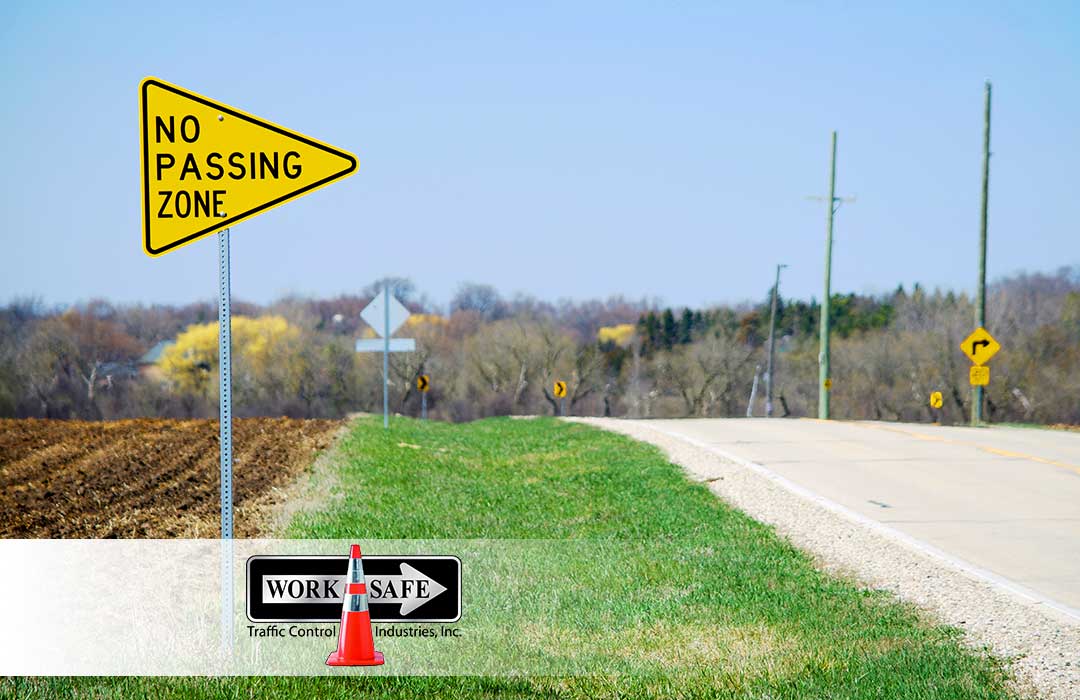 Have you ever wondered what pennant road signs indicate to travelers on the roadways? While these signs might remind you of a sporting event or the masthead of a ship, it is much more to a driver than meets the eye. Its sideways triangular shape is used for one reason only and that is to alert drivers that they should stay in their lanes and not to overtake the car ahead of them.

The yellow pennant roadway signs are just one of several shaped signs, serving as a means of communication to drivers in the United States. All the perspective shapes for these signs are a combination of symbols, words, and colors; letting the drivers become aware of specific information that deals with speed limits, yielding, stopping, highway staples, route markings, and road hazards.

The federal government regulates the standards of these shapes, sizes, symbols, and colors on the road signs, which are documented in the publication on Uniform Traffic Control Devices for Highways and Streets. The publication or manual is set forth to guide the public and drivers on crosswalks, roadway edges or borders, bike lanes, traffic signals, and signs, in addition to pennant signs.

What Is the Meaning of The Pennant Signs?

The pennant signs mean ‘no passing’ in a zone where it is prohibited to do so. Drivers could easily get a traffic ticket if caught violating the no pass zone. You would find these zones on roadways where drivers are not allowed to overtake another vehicle from an adjacent lane. The triangular sideways shape of the sign points in a direction to tell all drivers not to overtake any vehicle on the same stretch of roadway, but to stay in the existing lane until it is safe to pass.

All pennant signs have a yellow background. It is bright enough and cannot be missed; especially due to its bold lettering that reads “No Passing Zone.” If you pay attention, you will also notice a black border with three distinct edges on the front of the sign.

The triangle is pointed in the direction of the lane in which the driver is supposed to stay. This sign also helps the driver who may be learning to drive.

Additional Road Signs and Their Meanings

If you are going to approach a railroad, you will always see a sign warning you of the possibility of an oncoming train or a train crossing. The sign is shaped like a cross and cannot be missed.

When you see an octagonal sign with a strong red background, it is telling the driver to stop. If it is shaped like a diamond, it is a warning indicator. If the sign is triangular and points down, it is a sign for drivers to yield upon approaching an intersection. It is also a sign to indicate that the lane is merging.

Rectangular road signs that are vertical in shape and white and black in color is an indication that drivers should watch their speed limits. If drivers are approaching a school zone, there will be pentagonal shaped signs to alert the driver to slow down.

Horizontal road signs, which are either blue or green in color, are a guide to motorists that there are service facilities nearby. These may include restaurants, cultural centers, or gas stations. Road signs shaped like a trapezoid and with a dark brown background will usually be a sign that there is a National Park or Forests ahead.

The pennant road sign is usually erected on the left side of the roadway and is always facing the motorists. The sign is mostly installed before you go around a corner or up a hill. This is because it would be difficult to see traffic ahead in both those instances.

The sign is also emphasized by a yellow line on the driver’s side of the road. If you start to overtake a vehicle and one of these signs is coming up, you must completely pass the vehicle you are overtaking prior to entering that “No Pass Zone.” If not, you would be in violation of the road code.

Road signs are meant to protect drivers and pedestrians. It also helps to keep the highways and roadways safe. While driving on the road, it is important to pay attention to all these roadway signs. They are meant to guide you and warn you of any impending danger ahead such as intersections where collisions could be imminent.