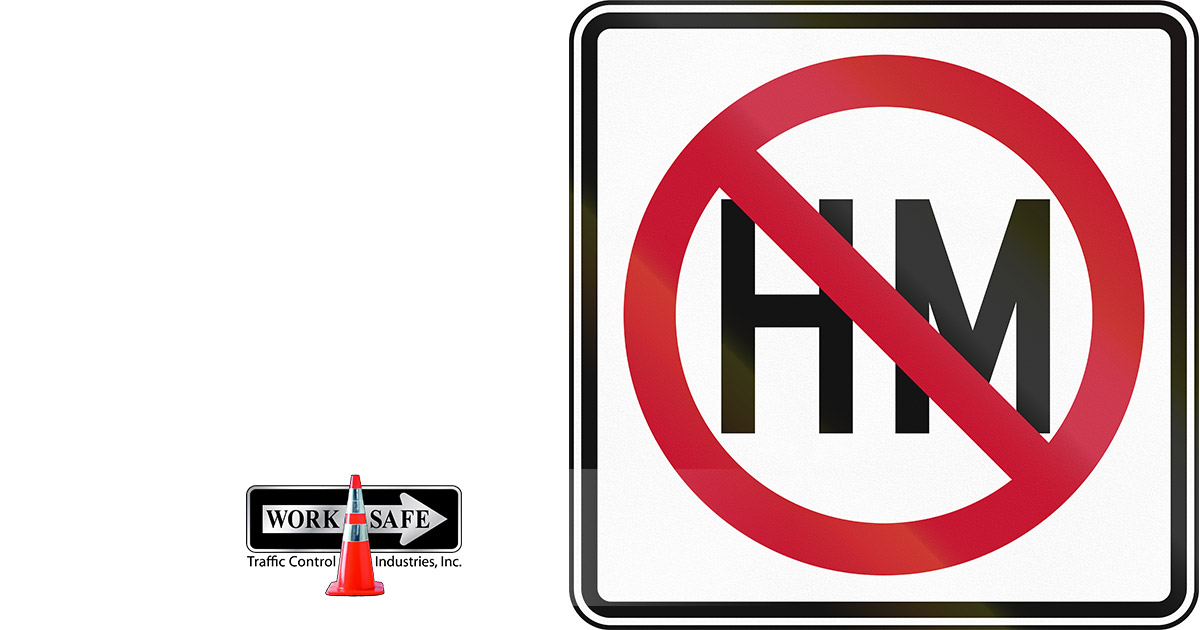 Roadway signage maintains safety and efficiency of traffic by conveying information to drivers regardless of language. Many different colors and shapes speak to different meanings, with yellow signs on the road functioning as general warning messages, green conveying directions or traffic movements, and brown signs along the highway indicating sites of recreation or cultural interest.

The Manual on Uniform Traffic Control Devices for Streets and Highways or MUTCD defines the U.S. standards for roadway placards. This ensures that every state uses the same placards to convey information for safety and traffic management. One such sign, that many drivers on the road see and wonder about it’s meaning, is the letters HM inside of a red circle with a line through it.

What Do the Letters HM Inside of a Crossed Red Circle Mean?

The letters HM printed inside a green circle or crossed red circle specifically speak to “hazardous materials.” If the letters are in a green circle, it means that the route is approved for the transport of hazardous substances. Inside a crossed red circle however, and drivers are prohibited from using the route to transport to any loads carrying dangerous substances.

Generally speaking, these HM signs are posted in metropolitan areas that may have designated routes for dangerous elements. The placards will be posted at locations where the driver will be able to exit, and find an alternate route.

Hazardous materials are those that are flammable, poisonous, corrosive, or otherwise dangerous in some way. These materials require special handling for public safety and the environment. Ground transport is probably the most common method of transporting hazardous substances. Many regulations apply to truck and train transportation of potentially harmful elements, including special licensing for drivers.

The Federal government maintains a list of the federally recognized HM routes, but not every driver can easily look up every road before every journey. States identify these routes based on different criteria, such as population density or institutions that could be seriously harmed if contaminated by dangerous substances.

Some states, such as California and Texas have many restricted routes, while other states do not regulate routes. New York state only regulates routes for hazardous elements within New York City, and the rest of the state has no such regulations.

Shipping hazardous materials through high population areas has proven to be deadly. A 1991 accident in the Bronx that involved a tanker and a car at a busy intersection killed five people and destroyed many businesses. In April 2003, a truck hauling gasoline overturned in Rochester.

One person died and at least nine people were injured. No-HM routes keep trucks off unsafe routes.
States regulate routes within their districts, but the mandate for HM and No-HM routes is handed down from federal guidelines. To be listed as a No-HM route, there must be a documented reason, but not every route that is potentially unsafe is marked as a no-HM route.

Is This Different From HC?

The MUTCD once used the designation “HC” which meant Hazardous Cargo. It was updated in the 2003 MUTCD to “HM”. Most municipalities have updated their road signage, but the HC sign was in use for many years.

The letter change from HC to HM was made in the 2003 MUTCD to match industry standards. Some commercial vehicles carried dangerous substances that might not be strictly considered cargo. The MUTCD didn’t elucidate the change, just notated it in all of its materials.

Why are These Standardized Signs Important?

It is estimated that there are nearly one million shipments every day of dangerous substances in the United States. It’s important for truck drivers to know the routes to drive when carrying hazardous materials. If the vehicle was in an accident or the elements exposed to the environment along certain routes, the consequences could be devastating.

Roadway signage provides information on the road, but vehicles transporting potentially harmful substances are required to have their own signage that identifies the cargo to alert people about contents inside. These workplace placards keep workers safe, but many people aren’t always aware of what these safety placards mean. Standardization is vital to maintaining order across the board to educate people.

The Occupational Health and Safety Administration (OSHA) also mandates dangerous material labeling in the workplace for uniformity and recognition. Training people to recognize a standard sign that identifies hazards keeps workers safe. These signs are recognized by the United Nations as a way to identify potentially harmful elements and workspaces.

Signs such as these are important to safety, but so is training and education to keep everyone safe. Without proper labeling of dangerous substances, no one knows what to watch for. Without training workers to recognize signage, they won’t be able to understand the signage. Having the right indicators reduces the employer’s liability and increases safety.
Hazmat drivers undergo extensive training to transport dangerous substances. Understanding road and workplace signage of hazardous elements must be standard no matter where the training is received.

potentially harmful materials placards are vital to roadway safety, as well as regulation of traffic on roadways. If your city is in need of accurate signage, contact Worksafe Traffic Control Industries for the best in road management and safety. Our products are MUTCD-certified and compliant, so you can trust that they will accurately communicate the information your drivers need. We provide excellent customer service, with a 7-day turnaround on most orders, you’ll be able to keep your citizens safe.