Do Not Pass Signs for Sale

Types of Do Not Pass Signs Available

The phrase “do not pass” is only one option. Some other signs include:

In each case, the sign uses black lettering on a white background with a black border. In some instances, you may need to add a specific distance at the bottom of the sign, such as “Next 1000 Feet.” These Signs are made with a 10-year life on aluminum with HIP sheeting.

Where to Place Do Not Pass Signs

According to the Manual of Uniform Traffic Code Devices (MUTCD), you should place do not pass signs at the onset of an area where passing would be dangerous. If this zone extends for a while, you can put intermittent signs until it finishes. However, you don’t have to place a sign to mark the end of the zone.

That said, if you need to notify drivers of a specific distance in which passing is not allowed, we recommend putting that on the sign, such as “next 1/2 mile.” 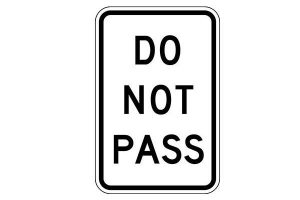 The purpose of a do not pass sign is to notify drivers that passing is either dangerous or prohibited. For example, passing on a two-lane road is hazardous if drivers cannot see oncoming traffic.

These signs may instead place some restrictions, such as passing on the right or no truck passing. The specific phrasing for the sign depends on the situation and where it’s located.

Why are Do Not Pass Signs Important?

Passing is a natural part of driving, especially on multi-lane roads, highways, and freeways. However, there are many locations where passing can be potentially dangerous or fatal. These signs can help prevent accidents and collisions at these points, such as:

Whether you need do not pass signs or other traffic indicators, WorkSafe TCI has you covered. We’ve been in this industry for decades, so we know what it takes to make high-quality signage for all situations. Some top reasons to work with us include: